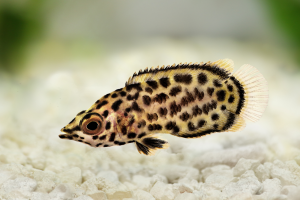 The Leopard fish, also known as Leopard Ctenopoma and Ctenopoma acutirostre, is one of the most underrated freshwater fish in the aquarium hobby.

If you think he is difficult to care for because he is a carnivore, this article will prove you’re wrong.

The Ctenopoma acutirostre hails from the Congo River basin. You can encounter this spotted freshwater fish in numerous biotopes, including swift streams and lentic habitats.

This versatile species can also be seen in several major tributary systems, including Kasai, Lefini, Ubangi, Tshuapa, and Lomami.

Juveniles sold in pet stores are around 1 ¼ to 2 ¼ inches in size. In the wild, the Leopard fish can grow up to 8 inches (20 cm) long. Captive specimens seldom attain this length, but they can hit 6 inches (15 cm) with the right living conditions.

The Leopard bush fish has a round, laterally compressed body resembling a leaf. Its snout is large and slightly elongated.

Similar to a leopard, its brown body is gorgeously overlaid with irregular dark spots. After all, you wouldn’t call this fish “leopard” if it doesn’t have any similar characteristics as the large, tawny African cat. This species may sometimes have a coloring so dark that it makes their spots hardly visible.

These fish with leopard spots are also fitted with spines on their gill covers, but males tend to have more than females. The scales of the males also have notched edges. Additionally, the base of their caudal peduncle seems to have a rougher texture than that of the females.

Apart from its gorgeous pattern, the spotted Ctenopoma exhibits certain behaviors that make its presence enjoyable.

Most carnivorous species are confident enough to cruise about searching for food, while the biggest ones compete for the position of Tank Boss. The Leopard gourami, on the other hand, doesn’t enjoy that kind of attention. Nor is the fish concerned with the behavior of its tank mates.

The unsociable spotted bush fish wants to be left alone to its own devices, and its appearance puts him in a favorable position. Other fish will find it rather difficult to locate him because he can blend into thick vegetation.

The Leopard gourami is rather timid for an obligate carnivore. Instead of pursuing its prey, the fish prefers to lie in wait and disguise itself among the bushy aquatic plants.

The patient Leopard bush fish can hide for so long that one could think he has already disappeared for good! But if his ambush fails, he’ll pop out of his hidey-hole. The next second you will see him right in front of you asking for some grub.

The Leopard gourami is calm and good-tempered contrary to most carnivorous species. Oftentimes, the fish isolates itself near the bottom. It doesn’t swim higher than the middle strata. But on a few occasions, you will find the Leopard fish swimming towards the surface and takes a gulp of air.

– Why Is It Called the Spotted Climbing Perch?

The Leopard fish is a member of the Anabantidae family, which comprises 34 ray-finned fish species better known as climbing gouramis and climbing perches. All members of this family are thought to possess the ability to clamber out of the water and move across dry land like a mudskipper.

One great example is the aggressive Anabas testudineus, which can survive on dry ground for almost a week or even more. These invasive fish have been spotted many times “walking” short distances using their fins and tails. More impressively, climbing perches are notable for crawling trees as they search for new habitats.

Albeit lacking evidence, experts believe that the Leopard fish is similar. Thereby, it was granted the moniker spotted bush fish to make a clear distinction.

– Is the Spotted Ctenopoma a Labyrinth Fish?

Yes, it is. The Leopard fish is a labyrinth fish just like its notorious cousin, the Anabas. These Anabantoids have an accessory breathing organ located behind their gills that allows them to absorb oxygen from atmospheric air. As such, the fish can survive when the oxygen drops to dangerous levels.

Similar to an actual maze, the labyrinth organ consists of vascularized and interconnected flaps of skin. The membranes protecting this organ are thin enough, thus allowing oxygen passage. Once the oxygen makes it through the membranes, it will then be carried along the bloodstream to be utilized by the different parts of the body.

Take note; not all Anabantoids are born with a functional labyrinth organ. Your Leopard spotted fish may have to reach full maturity before the organ becomes capable of performing its intended function. Also, this unique organ may vary in complexity. Those who inhabit oxygen-deprived conditions tend to have a better labyrinth organ.

If you are serious about breeding, then you’ll want to start with a group of juveniles. The fish will form pairs on their own as they grow.

When mating, the pair would embrace in a similar fashion as other oviparous species. Adults exhibit no parental care once the eggs are released, so they should be removed at this point. The fertilized eggs will float to the surface and rest in floating plants.

The egg will hatch after 48 hours. By then, you need to cover the tank with a tight-fitting lid, as the fry thrives in the warm, humid air. Offer the fry with infusoria for the first two days, followed by brine shrimp nauplii.

A female can deposit thousands, so you have to be sure to have a tank large enough to accommodate young fish. Unfortunately, the survival rate of the fry has always been low.

When it comes to compatibility issues, you won’t encounter much. As a rule of thumb, you want to make sure the tank mates you choose for your spotted Ctenopoma are species of a similar size requiring the same tank conditions.

You should not stock boisterous cichlids and large, aggressive fish that the timid Leopard gourami cannot handle. Likewise, you should avoid other Ctenopoma to deter aggressive territorial behaviors.

Moreover, schooling fish that are small enough to fit into the loach’s mouth are potential prey. Neon tetras, guppies, and danios should be avoided.

What do Leopard fish eat? In the wild, this species obtains nourishment from tiny crustaceans and fish. Since they will always remain an obligate predator, you’ll need to put in extra effort to fill their bellies.

In most cases, the best alternatives include:

Feeder fish are discouraged as they pose a risk for disease and parasitic infections. Likewise, they are low in nutritional value unless they have been properly conditioned. Instead, provide adults with strips of fish flesh, whole prawns, mussels, and giant earthworms.

Some sources suggest feeding your Leopard fish with beef organs. Your fish might eat it with gusto, but mammalian meat contains lipids that fish cannot metabolize well. Excess fat deposits may only cause your fish to suffer organ degeneration. Some fish may also accept dried commercial food, but these should not comprise their staple diet.

The Leopard fish is a hardy species. As a matter of fact, these fish can endure oxygen-depleted environments for a time due to their labyrinth organ.

Filtration and aeration are essential. A standard tank water filter should be enough to simulate water flow. Perform weekly 20 percent water changes or more, depending on the stock density of your aquarium.

The Leopard Ctenopoma can delight you for up to 10 years with the proper diet and water conditions.

To keep a pair, I recommend you get a 50-gallon tank. A better option is to choose a tank with more lengthwise space. A large bottom area will help keep territorial conflicts at bay among the bottom and middle feeders.

The substrate should depend on the specific requirements of the plants you wish to grow inside your tank. But unless you have a digger living with your Leopard fish, you’ll have plenty of options to choose from other than fine sand.

Add plenty of live plants. Your fish will use them to hide and hunt. It is also desirable to add caves, stone formations, and other decorations that will complement the aesthetic appeal of the plants. Just make sure to leave enough room for your fish to swim.

The Leopard bush fish do not need bright lighting. While they are not nocturnal creatures, they prefer dim light, which you can attain by using floating plants.

Not many people are interested in brown fish. Most hobbyists I know are fixated on bright and colorful species, especially ones with luminous hues. However, the Leopard fish also possess a unique beauty worthy in anyone’s tank.

Here’s the Ctenopoma acutirostre explained in a nutshell:

As long as you can fill its belly with delicious food, your pet is happy. Your fish will be fine in a low-tech aquarium. So check out the Leopard fish the next time you find yourself wondering what other fish to add to your tank. 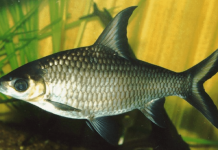 Bala Shark: Stop Your Fish from Dying Too Soon 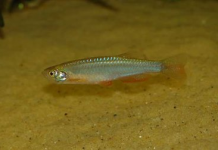