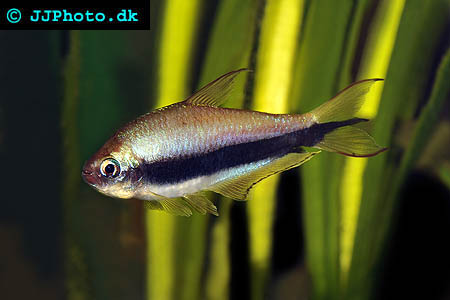 This species is commonly found in the market and is one of the best choices for the novice fish keeper, being a beautiful and unfussy species. You will likely purchase specimens that are bred in captivity, and they will do well with regular aquarium maintenance

club-shaped – with maximum broadness between dorsal and pelvic fins. The body lacks the adipose fin common in most tetras. The female is smaller, and plumper in the body than the male.

Fins of both sexes have a yellow tint, and are edged in black, with red at the base of the fin. The almost iridescent body of the fish is a mixture of blue, grey and mauve. A broad, dark stripe runs horizontally from mouth to tail. The body is lighter in color beneath the stripe than above. The more colourful male is also larger than the female and its fins are elongated. Another interesting gender difference is that males’ eyes are blue around the pupil while the females’ are more green.

Emperors are a peaceful species, and prefer a tranquil habitat. Tankmates should also be peaceful, with similar water parameter preferences. Keep Emperors in schools of at least four to five. Emperors enjoy tanks that are heavily vegetated with subdued lighting. Although soft water (can be achieved by peat filtration) is often recommended, they are able to flourish in even moderately hard water. Regular water changes are recommended. This fish will move through all levels in the aquarium. A darker substrate will show off the Emperor’s colors. A temperature of 73° to 79° degrees F (23° to 26° c.) should be maintained. Optimal water hardness is dH 5 – 19. Although emperors are peaceful, males can be quite territorial but it is unlikely that they will harm each other. Suitable in community tanks with other characins, dwarf cichlids, small catfish and loaches, gourami, rasbora and danios. 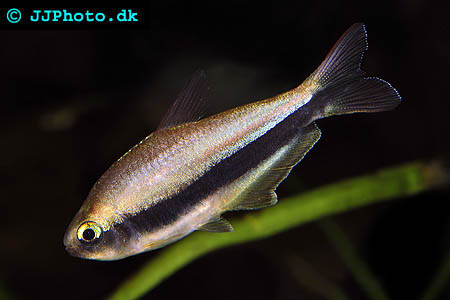 The Emperor Tetra is an omnivore, which means they eat both meat and vegetation. Any high quality flake or pelleted fish food is a good diet base. They will benefit from live food like Daphnia and mosquito larvae as well as frozen fish food.

You can get one or more breeding pairs from schools containing similar numbers of males and females. You should provide a separate tank for each breeding pair, due to the male’s aggression. Condition the male and female separately with live foods, before placing together for spawning. Keep the lighting low in the breeding tanks. A sponge filter should be sufficient. A lot of floating plants, or a spawning mop should be placed in the tank but no substrate is needed. This will help in cleaning the tank while the fry grow. Spawning usually begins at dawn. The parents, who produce 50 – 100 eggs, will often eat them, so they should be removed promptly after spawning. The fry will hatch 24 – 48 hours later. Feed the fry will hatch infusoria or other small foods such as freshly hatched brine shrimp. Do not allow the pH level to become too acidic, or you will start to lose the fry. Perform water changes weekly. 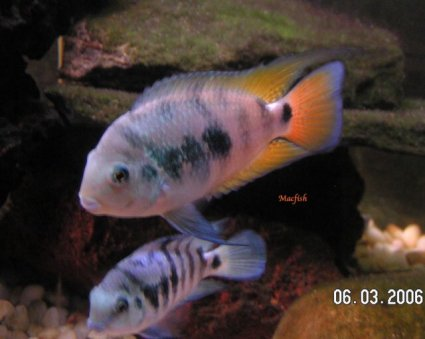 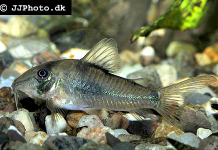